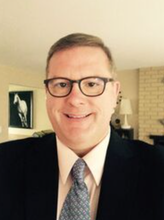 Eric Crimmins serves as the Operations Manager for the Fenton Community Orchestra.  He is also an Education Specialist for A&G Central Music, providing service and clinical expertise to Metro Detroit schools. Eric brings 30+ years to these roles as a professional musician and educator. Eric is a retired Band Director from Lake Orion Community Schools, a former proofreader for Hal Leonard Music Publishing, and is the Founder and Managing Director of the Southeastern Michigan Wind Ensemble (SEMWE), where he plays the alto saxophone.  While teaching, his middle school Scripps Cadet Band was selected to perform three times at the Michigan Music Conference in Grand Rapids. Eric is in demand as a music adjudicator, clinician, and guest conductor across Michigan. He also plays woodwinds in local pit orchestras, and is the tenor saxophonist in The Cass Saxophone Quartet.

​"I enjoyed working with Eric as he partnered with the Board and our Music Directors Andrew Perkins and Jane Ball to advance the FCO's mission and strategic pillars," said former FCO Board Chair Eric Szczepanski. Maestro Perkins added, "Eric is a friend and colleague and is a fantastic fit for our organization. His musical an organizational expertise and broad experience in the arts are a perfect fit for us."

Eric enjoys using his experience and knowledge and also learning new skills to support this wonderful community music organization. He lives in Bloomfield Hills with his husband Briand and their three dogs Oskar, Irving and Sidney. Tetyana Clarke, fundraiser, administrator and professional cellist, served as the FCO's Operations Manager from 2018-2022. Ms. Clarke has been actively involved in higher education, arts, and entrepreneurship. She is a graduate of the nationally-recognized internship program within the Penn State’s Division of Development and Alumni Relations, a member of American Women Business Association, and a fundraiser of non-profit organizations globally. She has worked for Concert Series of the National Museum of Art in Washington, D.C., and Market Square Concert Series in Harrisburg, PA. While working on her master's degree in Cello Performance at Penn State, she served as a Classical Music Student Ambassador, worked in the Office of Annual Giving, and as a Graduate Teaching Assistant.

Winning an international music competition in Zaporoshie, Ukraine, cellist, Ms. Clarke, made her solo debut with Dnepropetrovsk Philharmonic in her native Ukraine in 2010. After graduating with honors and full government scholarship from Dnepropetrovsk's Central Music School, Tetyana came to the United States to study music at Messiah University, PA, where she was a recipient of a Daniel Vollmer Scholarship in the Arts. Tetyana holds a Bachelor of Science degree from Messiah University, Master of Arts in Cello Performance from the Pennsylvania State University, and Master of Public Administration from the University of Michigan.

​ Tetyana Clarke’s LinkedIn profile may be viewed at: https://www.linkedin.com/in/tetyana-clarke/ Eric Szczepanski, Consultant
​
Eric Szczepanski has volunteered with the Fenton Community Orchestra since October 2013 serving on the Fund Development and Community Engagement Committee and was later appointed to the board in 2014-2016. Recruited back to the board in 2018 by co-founder and chair Kirstin Tenser, he served as board chair from 2019-2022. During his time on the board, Eric assisted former Fund Development Chair Bob McLuckie in writing the organization’s first state/national matching grant in 2014, which has since been renewed every year, developed a sponsorship program, and led the planning and execution of the organization’s three strategic pillars (1. Creating Opportunities for local musicians, Enriching Community Life by sharing the orchestra experience, and 3. Engaging Stakeholders to advance the organization and its mission).

Eric is passionate about volunteerism and is actively involved in higher education, arts, and community enrichment in the Fenton and Flint area. He is the volunteer program coordinator at Kettering University. He received his bachelor’s from Ferris State University with a focus on business administration and music and entertainment management. His community involvement includes St. John Applefest in Fenton – set-up, Kettering representative to the University Avenue Corridor Coalition in Flint – supporting communications and strategic planning; and City of Fenton Arts & Culture Commission – serving on the grant and strategic planning sub-committee and co-founder and concert chair for the annual Cabin Fever Music Series in Fenton.
​
“Together, we are enriching life in our community through music and the arts.”